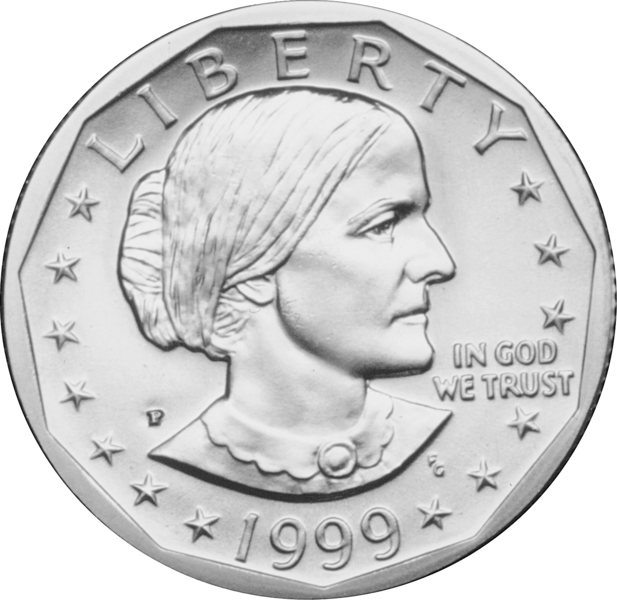 The Susan B. Anthony dollar is a United States coin minted from 1979 to 1981, and again in 1999. It depicts women's suffrage campaigner Susan B. Anthony. The reverse depicts an eagle flying above the moon (with the Earth in the background), a design adapted from the Apollo 11 mission insignia that was also present on the previously issued Eisenhower dollar (Source: Wikipedia: SBA).

Susan B. Anthony was born in Massachusetts on February 15, 1820. She is known for campaigning for the right of women to vote. She spoke out publicly against slavery and for equal treatment of women in the workplace.

On March 8, 1884, Anthony testified before Congress supporting women's suffrage (right to vote). She urged senators to support an amendment to the U.S. Constitution that, she said, "shall prohibit the disenfranchisement of citizens of the United States on account of sex..."

In 1979, she became the first woman whose image appeared on a circulating U.S. coin. The coin is called the Susan B. Anthony dollar and is worth one dollar. (source: USCIS M-638)

Posted by US Citizenship Podcast at 12:09 AM