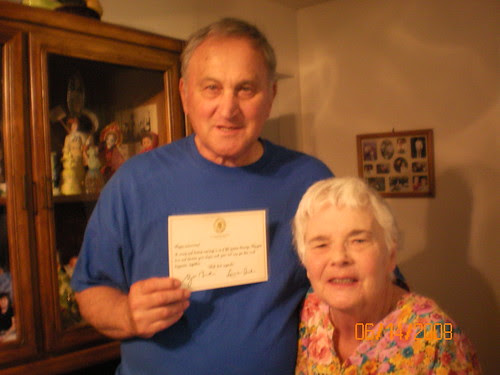 Gene & Elinor Gagliardi display an Anniversary Greeting
from the President GW Bush and the First Lady ,
given in honor of their fifty-first anniversary.
Over fifty years ago, my parents Gene and Elinor Gagliardi met at the University of Illinois, Champagne-Urbana. They graduated on June 15, 1957, got married on June 16, and drove for the next four days across the country so that my father could accept his naval comission on the USS Hancock. Fifty-two years and five children later, they are still going strong.

Last year, I knew that I would be out of town on their anniversary, so I wanted to do something extra special. I filled-out a simple online application at WhiteHouse.gov, and six weeks later my parents were thrilled to receive anniversary greetings from President George W. Bush and First Lady Laura Bush.

Instead of applying online, the Obama administration requests that people interested in receiving Golden Anniversary, Wedding, Birth greetings, etc submit their request in writing six weeks before the event to:

LISTEN: ESLPodcast 53 - Understanding Men and Women
You know, they had their first wedding anniversary last week. Guess what her husband gave her? Download Podcast

Posted by US Citizenship Podcast at 12:01 AM