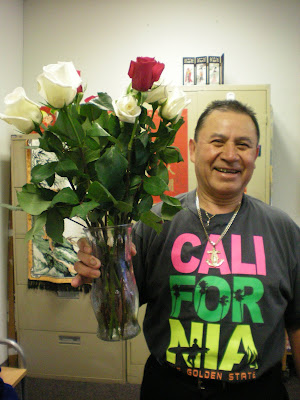 This is a short history about myself. My name is Reynaldo Elias Venegas Robles.
I am from Mexico. I was born in a village named Ejutla de Eres, Oaxaca. When I was 20 years old, I moved to Mexico City where I studied in high school and college. When I finished college, I got my certificate, then I enrolled in a course for industrial electricians. I finished in three years, and then looked for a job.
I went to a factory to ask for an application. The manager asked, "What do you want to do?" I told him, "I'm an electrician." Then he said, "Ok," and gave me an application. I filled it out, handed it to him, and then he immediately gave me a test for the electrician position. After I took the test, I worked at the factory fo a long time--twelve years! After that, the boss gave me a payment for all those years of service. The factory gave me a lot of benefits, and the boss gave me vacation three times a year and a bonus four times a year. I earned a lot of money, but I had a lot of responsibilities, too.
After the factory, I bought a passenger bus and became a bus driver. I worked very hard for three years and bought three more taxi-cabs. In 2000, I sold two cars and the bus and came to the United States. I didn't know about how to find a job because I couldn't speak English, so I came to Milpitas Adult School. Since 2003, I have been going to the Adult school five days a week and work every day--Monday is my only day off. I don't have a girlfriend--I work too much!
I am thankful to my teacher and friends at Milpitas Adult School for helping me to learn English.
Posted by US Citizenship Podcast at 7:44 AM