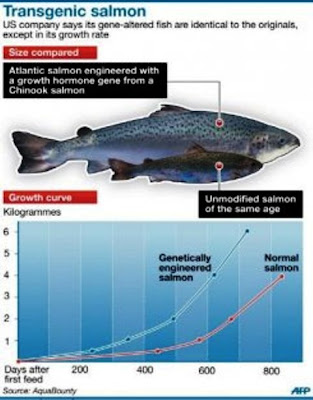 click the picture to make it larger
VOANews: US Considers First Genetically Modified Animal for Food

A salmon grows faster with genes from two other fish, but the idea raises debate AGRICULTURE REPORT (download MP3)

Farmers in the United States have grown genetically engineered crops since the late nineteen nineties. Now, a federal agency is deciding whether to let a genetically modified animal into the food supply for the first time. A company, AquaBounty Technologies, has developed the AquAdvantage Salmon.
Posted by US Citizenship Podcast at 12:01 AM