Holding the Bag 06: One More Fare 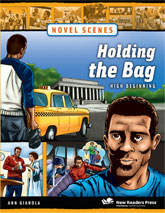 Holding the Bag by Ana Gianola
Negasi is a taxi driver from Ethiopia who has been in the U.S. for many years and has a family. He accidentally becomes involved in a robbery and faces a moral issue. (Buy here)

CHAPTER 6 VOCABULARY
Posted by US Citizenship Podcast at 12:30 AM