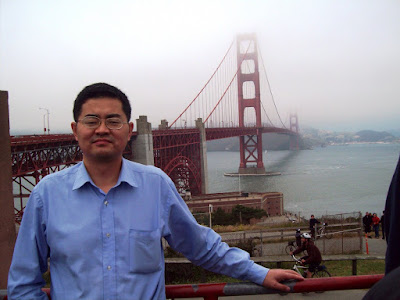 I was born in Tibet in westen China, but I am Chinese, I am not Tibetan. In my hometown, there are many religions and nationalities such as Muslim, Buddhist, and Mongolian. When I saw so many religions, I started to think about the value of my life and I asked my father if God exists--I like philosophy and religion.

When I was 18 old, I went to university in Beijing to study philosophy. In China, all students must learn Maxist philosophy, but I dislike it, because Marx said that there is no God, no value of spirit, no love……only class struggle and violent revolution.

In my university’s library I read a book named "Protestant Ethic and the Spirit of Capitalism" (新教徒伦理学与资本主义精神). This book said that Protestant Christianity has a close relationship with democracy and free-market economy, because protestant values include love, freedom, equality, respect for human rights, and monitoring the government. I started to like Protestantism.

When I had a job, I went to many cities in order for businiess. In 2004, I went to Guilin City in south China to attend a conference. I met a pastor who came from Hong Kong. He talked with me about Jesus for 6 hours in a hotel. I came to know my sin: I know that Jesus, the son of God, saved me from my sins through the cross. Jesus is the sacrificial lamb for our sins and for God’s justice and love. At last, the pastor lead me to pray to God--I became a Christian at that time.

Then, I went to a Free Church in Beijing and never stopped. In China, churches are divided into two branch: one is a government church and the other is the Free Church,whch is also called the Underground Church. The Free Church refuses any control from government. When I became a Christian, I participated as a teacher in the Free Church. After 2005, I went to many Free Churches in China as teacher and speaker.

Because Chinese culture adores the Dragon culture (in politics) and Wolf culture (in economics), I started speaking about the Lamb culture of Protestant Christianity. Many Christian churches welcomed me to speak about the Lamb culture. So when I became a famous teacher, the government started to harrass me, so I resigned from my church job, and came to the USA last year to study in a seminary in San Jose.

On Easter, I must thank Jesus for saving me. Because of His death, we have no sin; because of His resurrection, we are victorious in the Word.

At last, I ought to say: "God bless China! God bless the USA! God bless you and me! Hallelujah, Amen!"